We have a purpose-built scout hut in the centre of Newbury: 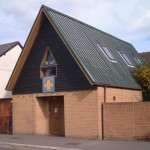 The Group was first registered, as Wesleyan Cubs, on 22 May 1930. The Group HQ was then the Northbrook Street Wesleyan Church.

The Group later became known as 38th Newbury and finally 2nd Newbury in May 1944.

From the booklet produced by the district for the Diamond Jubilee of Scouting in 1967:

The 2nd Newbury, then the 38th, began its carer in 1930 with a Cub Pack followed soon after by a Scout Troop in the Methodist Church. Its first public appearance was at a District Tamasha held in the Corn Exchange when all groups took part in a display. A break away from the church premises later took the Group to the District Headquarters where it remained until the building was bombed in 1943, moving then to the Rover Den in the Wharf (The Rover Den is still there – it is in the hut by the canal next to the Wharf / Victoria Pond Bridge!). In 1950 a piece of land became available in Northcroft Lane for rental. With a now very active Parents Committee the present Den was built and a year or so later the land was purchased.

The new Den was opened in 1951 by the first Scoutmaster, Mr Len Whittaker, almost free of debt. Mr Len Whittaker was also the founder of Newbury Rugby Club and donor of Murray & Whittaker garage in the 1940’s/50’s. After a couple of abortive attempts a Senior Troop was started in 1952 and has continued steadily ever since. As with all Senior Troops, numbers have tended to fluctuate but by and large we have had one of the most consistent and strongest senior troops in the county. Emphasis has always been on the outdoor and over the last few years most Seniors have been members of the Snowdon Climbing Group. Other activities have been all the year round camping, hiking and canoeing, while many and varied good turns have been done.

The Group has been very fortunate with its leaders as there have been only two Cubmasters and three Scoutmasters. There have been a number of King’s Scouts and Queen’s Scouts and Scouts have attended several World Jamborees. The troop has held a summer camp every year with the exception of the war years when the late D.C. Mr J Stevens (Stepho) stepped in to fill the breech while the Scouters were on Active Service.